An overall view of the Plešivec hill from Hostomice.

The prehistoric ‘Plešivec’ hillfort on a dominant hilltop could have served as a sacred precinct. The hillfort consists of an acropolis and an annexe, and to this day is surrounded by a stone bank up to 10 m wide. The site is enigmatic mainly because of its location away from the common inhabited areas, and a large number of bronze artefact hoards. Also discovered at the site were melting furnaces and other evidence of metallurgy production, which could have held both practical and ritual functions in the Bronze Age. A rather long tradition of the sacred site is also suggested by finds (hoards) from other periods. During the last two decades, the site has suffered heavily due to activities of illegal treasure hunters with metal detectors and, thus, many prehistoric finds have probably been lost forever. 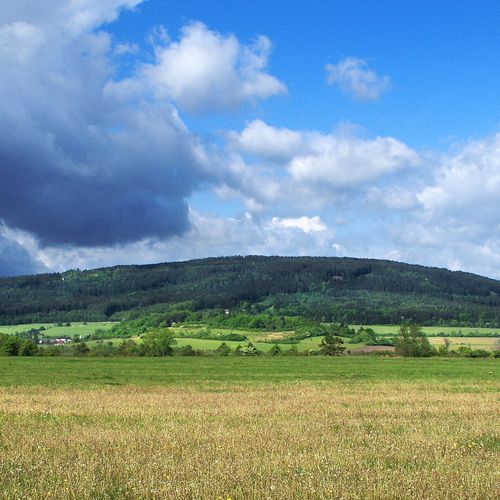 An overall view of the Plešivec hill from Hostomice.
Photo J. Marounek, 2008. 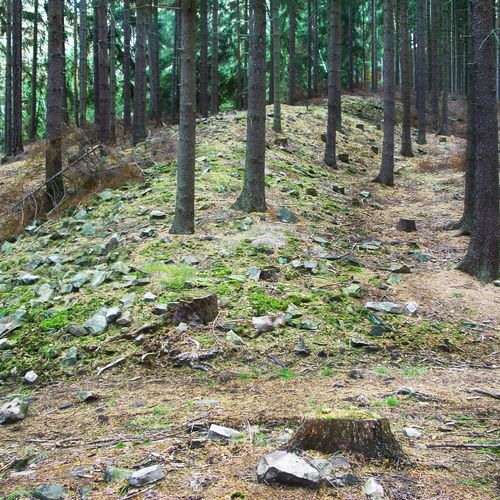 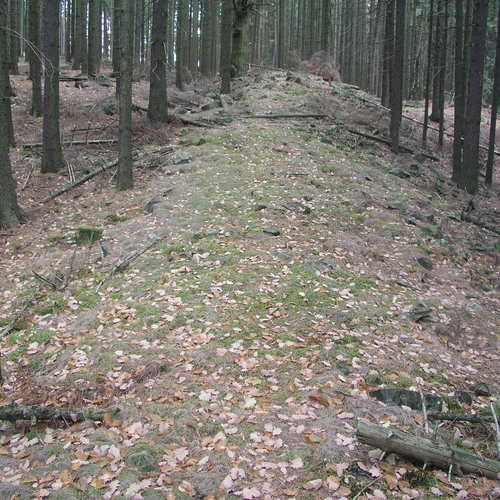 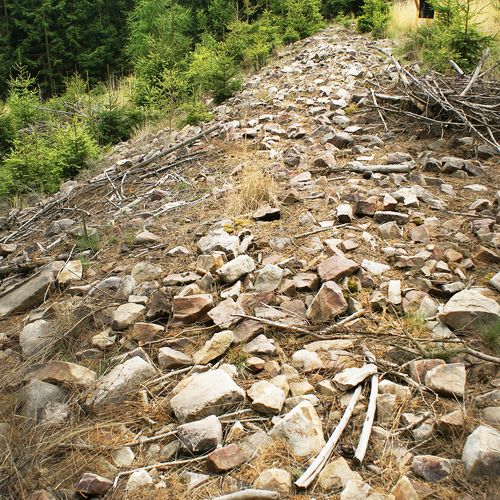 Stone bank on eastern side of the inner hillfort - acropo...
Photo J. Marounek, 2008. 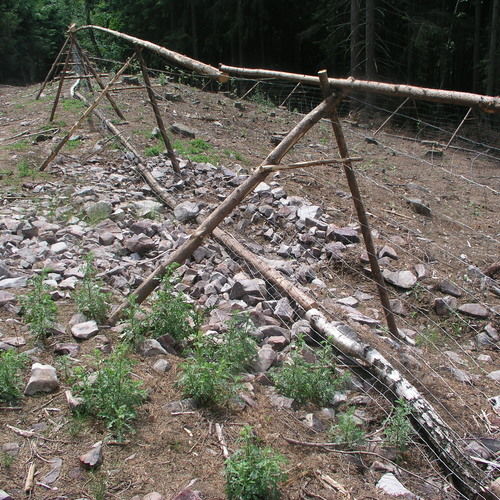 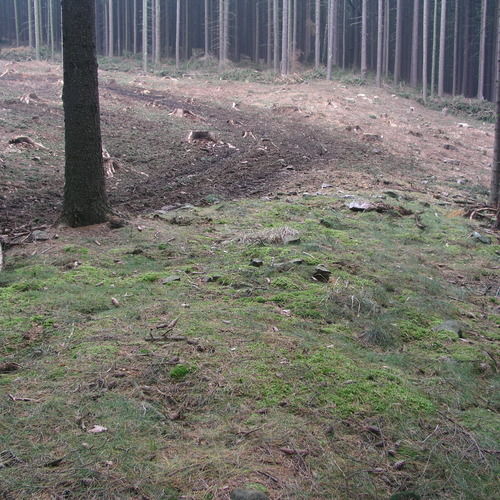 Bank disturbed by gathering of the wood.
Photo M. Kuna 2003. 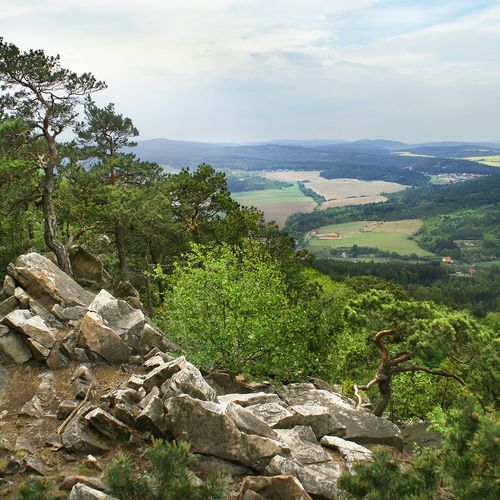 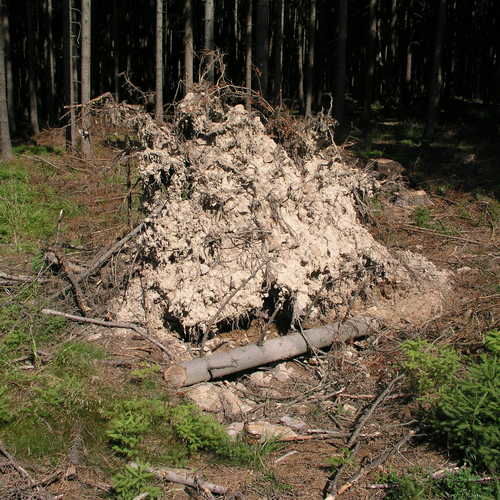 One of windthrows with pottery sherds.
Photo M. Kuna, 2003. 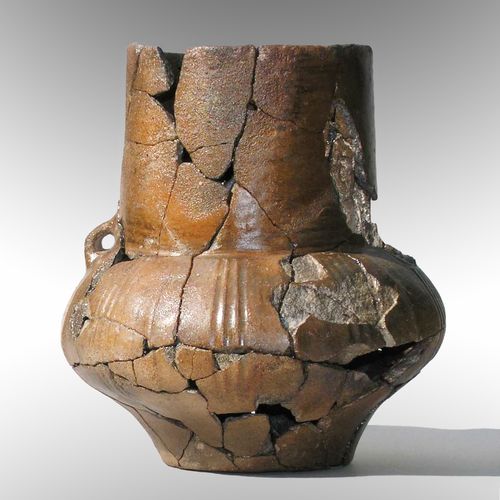 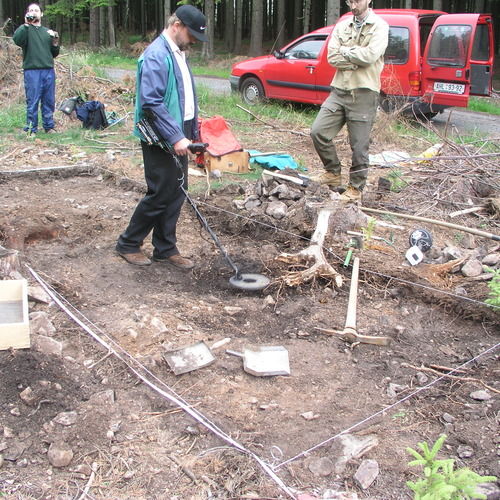 Map notes: A – ‘Old Gate’, location of the original entrance and several hoard finds; B – acropolis entrance; C – edge of the acropolis with a beautiful view of the valley; D – the ‘Zahrada’ (‘Garden‘) location where inner and outer banks meet; E – modern road cut through the bank; F – ‘Raven’s Rock’, a natural rock incorporated into the fortifications; G – deserted medieval village of ‘Mořina’. Map symbols are available in the Downloads section. 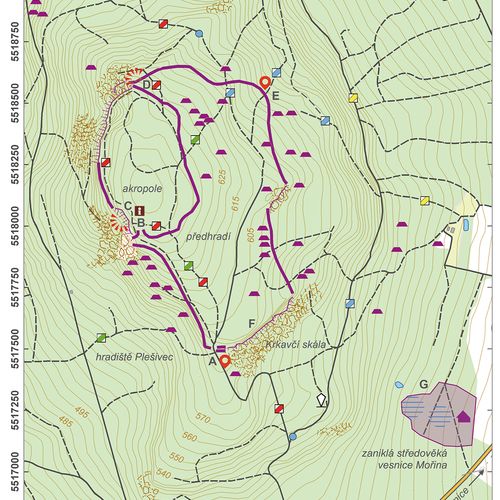